"A big Wall Street bank was a complex environment."

Here is another surprise package. I was shocked by how compelling Michael Lewis could make a tale about financial transactions and electronic settlements. Hard to believe, but this one is a page turner.
Imagine that millions of a second could make or break you billions and then you might be more quick to jump on board.
Layer upon layer the story builds with a compelling yet worrying voice.
Check this one out, the blurb really doesn't lie, it will certainly hold you attention.
It loses one point for not completely driving the point home.

4 out of 5 day traders need a good internet connection. "I was also trying not to date in Kabul, as Afghanistan resembled Alaska if you were a woman - the odds were good but the goods were odd."

So this might strike you as strange Easter holiday reading (who knew- I finished 3 books in 3 days), somehow I was tempted by Tina Fey. Kim Barker's memoir, originally published as The Taliban Shuffle has recently been adapted as an upcoming movie and well you know my thing is to read the book first.

I was probably expecting more comedy, less dismemberment; but I guess a gal can't be too choosy. It is weird that this is the second book I've read of late that sets out the catastrophic impacts of intervening when cultural differences are high. Kim starts out as this completely naive woman thrust into the cultural melting pot of the Middle East and continually finding herself in inexplicable situations. Her voice is entertaining and relatable and unusually self deprecatory. I always thought that was more of a British or Australian trait. Perhaps that is why I especially appreciate it.

Perhaps the main takeaway for me was the relationships forged under pressure. The strange pseudo dates with politicos, the importance of keeping your handler happy, the importance of a knowledgeable driver and the dangers of dating in a war zone.

Ultimately there was something a little frustrating about the book. Perhaps that sums up the world today, where understanding always seems a little out of reach.

Posted by Leggygal at 04:06 No comments: "Did even Nero of Rome devise such a cruel method of death?"

I am really surprised at how much I enjoyed such a dark and dismal story. If I told you this was a tale about a Jesuit priest in 1640 heading to feudal Japan to support the underground Christians there, you would probably roll your eyes in your head and ask me why would I want to read that. This is such a beautifully written book. It is questioning and dark and deep and gorgeous in the way it highlights cultural differences and the way we should all question our beliefs and motivations. It is quite obtuse and beautiful, like amazing poetry and could be interpreted so many ways.
For some it will no doubt reaffirm blind faith; for others it will do the opposite; and yet both will find the writing thought provoking and amazing. That is a testament to a genius writer.
It will be interesting to see Scorsese's upcoming cinematic interpretation. Frankly, I can't wait.

5 out of 5 times people were shocked I liked a book about a priest.
Posted by Leggygal at 03:48 No comments:

Fantastic Beasts & Where to Find Them by J.K.Rowling "Tebo hide is highly prized by wizards for protective shields and clothing."

For those Harry Potter fanatics who still long for more Potter, this sliver of excitement is sure to cause excitement that is off the richter scale; for me not so much. Ms Rowling thoughtfully delivered this little volume to benefit charity, so I can't be too harsh. It is, as the title points out, a resource book for those of the wizardy type and endorsed by Dumbledore, no less.
No story to speak of, so I can only imagine what the screenplay for the upcoming film adaptation will be like. In any case, it is charming - especially the footnotes.

3 out of 5 wizards all require creature information.

Posted by Leggygal at 03:41 No comments: A short story collection from Margaret Atwood is like a mixed box of chocolates which all taste singularly great but completely different from each other. Some of these short tales intertwine which just adds to the sense of wonder.
It does not take 300 pages however to get the very clear sense that getting old really sucks.
Life becomes fixated on long ago, virile, agile days before the boundaries of an ageing body come into play.
There's a perfectly fiendish murder, revenge, a frail old dear lost in a fantasy land with her dead husband, not to mention a rather scary plot to burn the inhabitants of a retirement home to make way for the new.

Atwood is, as always, an amazing spinner of tales and these little gems will undoubtedly reward the reader. It is not often that one inhabits the world of a once lecherous, now cantankerous old man or of a woman who has completely reinvented herself after being poorly used as a young, poor 14 year old into a rich, black widow, and yet here the reader is completely drawn into these vivid lives, to take them for a brief spin.

5 out of 5 aching bones are a sign of things to come.

Posted by Leggygal at 00:18 No comments: "If your subconscious is repressing something, maybe you'll want to just accept that."

Ladies and Gentlemen, let me tell you, this avid reader has been counting down the days until her copy of Quantum Night arrived and she was not disappointed. Neurological science is a field that is in someways one of the last frontiers, well I say one of - they haven't exactly got everything figured out yet, of medical science and ripe pickings for some fantastic speculative fiction from the always engaging Robert Sawyer.

This reminded me somewhat of his WWW series in its explorations of consciousness, but this time from the angle of the psychopath. A long standing popular culture trope for insidious evil, Sawyer brings a far broader scientific perspective to bear and yet does not take off the lever on suspense, violence and that creepy feeling where you just have to turn the page, even if you are scared of what might come next.

Jim Marchuk makes for an intriguing and somewhat unreliable narrator, particularly given his haziness about the year 2001. That being said, I think this is one novel where for me to give too much of the plot away would do the reader a disservice. I urge you to grab a copy and enjoy a thriller which melds science and ethics with fast paced readability in the form of a well-constructed , must-read novel.

I particularly enjoy Sawyer's ability to construct networks of consciousness to potentially catastrophic effect. If the WWW series posited what it means to be human, Quantum Night might just uncover some of humanity's nastier aspects. Q1, Q2 or Q3? Read it and find out exactly what that question might mean. "The more a person knows, the more things have gone wrong."
I think this is perhaps a case of poor marketing. The blurb had me waiting for a potboiler style thriller which never eventuated. Instead, I relished the absolutely entertaining lines that this novel afforded. A fantastic satire about the media expertly delivered as his seventh and, I assume due to his passing on the 19th February, final novel.
There's something delightful about a newspaper that will never be published being called "domani", after all tomorrow never comes. Throw in a conspiracy about Mussolini and here is an intriguing read, albeit a rather quick one.

5 out of 5 newspapers are dead.

Posted by Leggygal at 01:53 No comments: 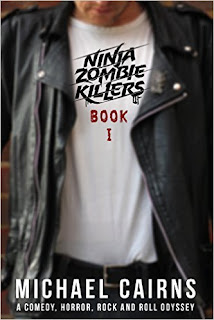 "How would she respond if he explained the holiday camp was a gathering place for the undead, almost undead and anyone else who feasted on human flesh and happiness?"

Do you like your zombie adventures to be a little more tongue in cheek than the walking dead? Then perhaps this series is for you. I was lucky enough to receive a copy for review from the author, I know, I'm a lucky gal!!

Life is not easy working as a band on the run, even more so when you happen to be the chosen one. It helps if your band mate is a ninja.

A fun, supernaturally charged romp chock full of rock and roll antics and the undead.

Posted by Leggygal at 03:36 No comments: