This will only hurt a little by Busy Philipps 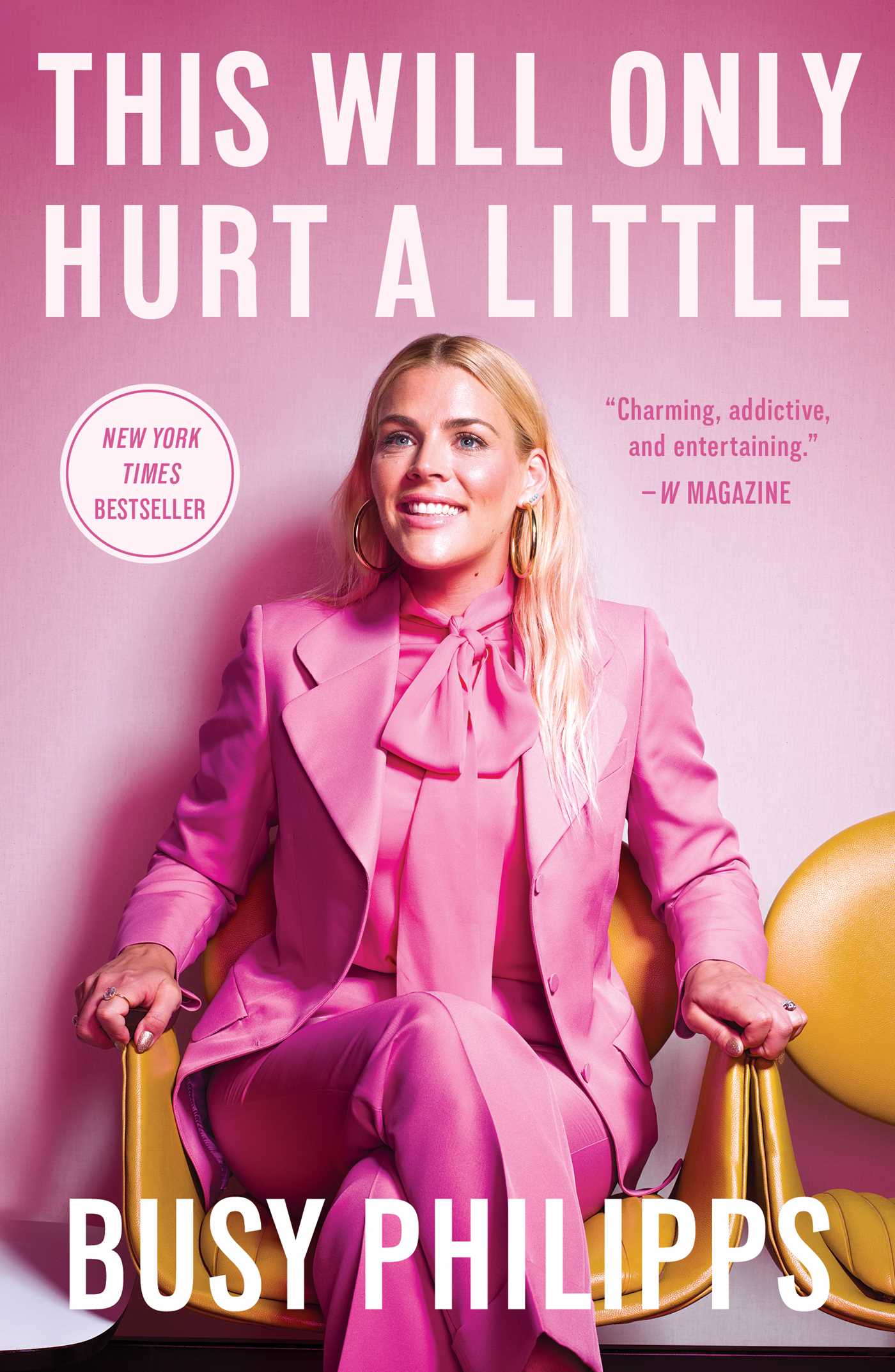 “And I come from a fairly long line of dramatic humans and storytellers. And part of being a good storyteller is knowing which parts need to be embellished a bit and which details need to be lost completely.”


I defy anyone to read a copy of this and not want to be best friends with Busy. She is equal parts adorable, successful, bruised and broken. The road to adulthood was full of many of the pitfalls we can all relate to. She matures on television with the added drama of not fitting the miniscule tv body mould or possessing Katie Holmes’ perfect close-up face (although I’d argue Busy is far more attractive). Just check out the cover and I’m sure you will agree.

This is an approachable story with just a hint of stardust. It is unlikely many of us would have the Hollywood touches of say, dating Tom Hank’s son, crashing swanky parties or becoming best friends and red-carpet regulars with Michelle Williams. Somehow, Busy’s charm smooths over any sense of these surrounds. She is like an old school friend, recounting relatable tales and they are just as beautifully imperfect as the ones of that ilk. Here is a girl not afraid to name and shame, making for a captivating read. So often these days celebrities “write” a book that might as well just be a well collated Instagram feed of airbrushing facts and looks. Busy delivers something far more appealing.

Her life may have had some ups and downs, but the journey is one that is both easy to relate to and reassuring. Nobody is perfect or has a perfect life. People worth knowing are ones that understand the difference between the front we all put on and the reality behind it.


5 out of 5, the perfect stocking stuffer for your bff.

Posted by Leggygal at 01:45 No comments: “My love for chaos, conspiracy and the dark side of human nature colors the behavior of my charges, most of whom are already living near the fringes of acceptable conduct.”


Friends who work or who have worked in kitchens waxed lyrical about this book, their eyes glazing over in that same worshipping manner that you see in kids talking about their football or musical idol. Reading this, I can see why. Certainly, in a post me-too world its problematic to explore an atmosphere that often borders on the abusive, but for someone who has worked in close quarters under tight deadlines with people under pressure, I completely understand the heightened circumstances.

The insiders edition has rather delightful handwritten additions from the author which feel particularly strange given his untimely passing. In some ways it is almost like a voice from beyond and there's something reassuring about that. My path to Bourdain was through his television series and I was quite late to the party. I was rather shaken by his early departure because even watching a few episodes made me feel like a kindred spirit and that always makes these difficult circumstances more troubling.

At any rate, reading this little expose was a delight that I would happily revisit. Bad behaviour has never been more entertaining.


5 out of 5 bad boys are more entertaining and often care more.
Posted by Leggygal at 01:47 No comments:

The Lost Man by Jane Harper ” They met by the headstone. Nathan knew he would have to look down at some point. He delayed the moment by opening his mouth.”

When I heard the author of The Dry and Force of Nature had another novel published, I was chomping at the bit to get a copy. Thanks to the sheer height of my ‘to be read’ pile, I’ve only just got around to it. Let me start by saying how much I missed Aaron Falk as a character and it took a while for me to get into the rhythm of this standalone novel. Was it, I wondered, because the protagonist wasn’t a particularly charming bloke? Was it the fact that the other two books were so good?  Personally, I think both statements ring true. Nevertheless, I persisted, and it really was worth it in the end.


While the novel commences with the death of Cameron in the outback, it takes quite a while before, as a reader, I felt particularly invested in the mystery behind that outcome. The jury was out on the guy telling the tale, however, that distance, once you get to know the character better, is actually quite brilliant. Nathan is remote, distanced, troubled and his narrative painfully reflects that. This is one of those books that, I think, upon re-reading, would elicit even further praise.


The thing about crime novels that draws you in, is rarely the crime. Characters drive the action and as a reader, I felt I was getting to know these characters as the tale progressed. Their hidden secrets, their communication issues, their foibles and their failings trickle out in a slow, but compelling fashion. The development of the relationship between Xander and Nathan was particularly poignant. I also loved the way my perceptions of characters changed wildly as I discovered (through Nathan) what was really going on.


When I closed the last page somewhere around the witching hour, I’d come to the realisation that this was a yet another stellar read from a fantastic author. I’ll be buying whatever she ships next!


5 out of 5 dusty trails and backpackers don’t mix.
Posted by Leggygal at 21:31 No comments:

Wundersmith, The Calling of Morrigan Crow by Jessica Townsend “Now that she was a fully-fledged member of Nevermoor’s most prestigious group, was it all right to be honest about the fact that she grew up in Jackalfax, deep in the heart of the Wintersea Republic, among the enemies of the Free State?”

Morrigan Crow is back, and I, for one could not be happier. Well, unless that means there is another volume to this delightful series. Which, let’s face it, the ending suggests ( no spoilers) that there might be. Being part of the Wundrous Society and taking lessons isn’t a case of smooth sailing for our plucky heroine. The spectre of that other, evil, Wundersmith – you know the one that gives all Wundersmiths a bad name – is ever present. Not to mention how boring lessons are.


Fortunately, Morrigan is bound to make some amazing friends, endure some challenging circumstances and entertain those reading with some wondrous feats. This is one of the books that you wish you had kids for, just so that you could read it to them.  The world that Townsend creates is a delight and tinged with the prospect of menace, which makes it all the more appealing. I love that the books central theme seems to be that everything is not black or white and there is a lot of grey in the world. Power is only evil when misused.
Grab your W pin and settle in for over four hundred pages of delight. You won’t regret it.
5 out of 5, if only I could award more points I would, as the crow flies.

Posted by Leggygal at 18:40 No comments: