A Rage in Harlem by Chester Himes

"Jackson was as crazy about her as moose for doe."

Jackson is one gullible man where women are concerned, he would do just about anything for his Imabelle and that spells trouble.

A crime novel set in Harlem, however, spells entertainment. Enter a cast of double crossers, faux nuns  in drag and promises of gold mines and get rick quick opportunities.

This popular penguin made for a quick, enjoyable read, putting a different slant on the usual hard boiled detective novel. The ending, in particular, was a hoot.

4 out of 5 men fall victim to women like Imabelle.
Posted by Leggygal at 18:47 No comments:

The Sor­rows of Young Werther by J.W. von Goethe 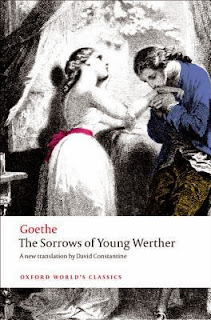 “What sort of crea­ture must he be who merely liked Char­lotte, whose whole heart and senses were not en­tirely ab­sorbed by her”

This reminds me of the kind of sentimental bosh one writes in one’s diary as a seventeen year old. Always madly in love with people who don’t feel the same way, consistently sprouting superlatives and emotions turned up to eleven.

Did I enjoy this, no not really. I feel happy that I’ve crossed off yet another 1001 book from the list, but that is just about it.

Werther is a whiny wimp that really does not appeal to my sensibilities. Perhaps it lost something in translation – who can say? Ultimately, it is a particularly  short book and in my opinion- that’s a blessing.

2 out of 5 courtly love traditions leave one cold.
Posted by Leggygal at 03:41 No comments:

At Last by Edward St Aubyn “Thomas, recognising the allusion to the Vulcan logic of Star Trek II, made the same gesture with his hand.”

2013 will go down in my journal in the annals as the year I became acquainted with Patrick Melrose and read through the four novels that detail his life.

The final instalment of the 4 part saga sees the death of Patrick's mother, the last remaining link to his traumatic childhood. She's had her moment donating the family holiday home and the better part of her fortune to her foundation, she's survived the suicidal notes of the preceding novel and has at last left behind the mortal coil.

The cast of characters at the funeral makes for a hilariously entertaining read. In between hitting on the good looking waitress, dealing with the insane behaviour of the ex-Priory patient guest and other tragedies, there is little respite from the insanity.

Unfortunately, completing this novel means there are no further trips into Patrick's dark but hilarious life.

5 out of 5 kids survive their childhoods.

Posted by Leggygal at 21:44 No comments:

The Yellow Wallpaper by Charlotte Gilman 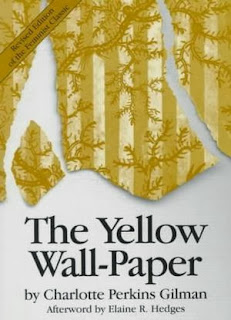 "If a physi­cian of high stand­ing, and one’s own hus­band, as­sures friends and rel­a­tives that there is re­ally noth­ing the mat­ter with one but tem­po­rary ner­vous de­pres­sion — a slight hys­ter­i­cal ten­dency — what is one to do?"

So as to add to my list of completed books (and cross another 1001 entry off), I thought it best to tackle one of the shorter works at my disposal and this short story certainly fit the bill.

Is the young woman a victim of her imagination, does she have issues or is the hideous wallpaper on her rental property coming alive?

I can understand being driven a little crazy by an unsightly wall covering - yellow to boot!

It is difficult to write too much on the subject - the story itself is a mere 30+ pages itself, but certainly interesting enough.

3 out of 5 yellow walls are crying out for re-papering. 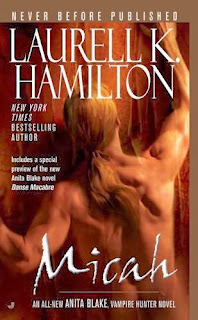 “Micah was the only one who had ever come into my life and man­aged to stay.”

What can I say about this instalment of the Anita Blake series? It is ridiculously short and apart from one re-animation assignment it seems to exist only to give the much put upon Micah a little attention.

Basically, it seems, poor Micah has struggled to find a woman, because.. oh poor dear, he’s been overly blessed downstairs. Every euphemism in the world is used to describe his circumstances – oh it did make me laugh. Lucky he found Anita, she’s always been... accommodating.

This review is almost longer than the “novel”, which is really quite strange when you consider its precursor was quite sizeable.. hmm much like Micah.

So, Anita gets a trip away with Micah, and I miss Nathaniel, Jean-Claude and the gang.

3 out of 5, re-animations get in the way of Anita’s shenanigans.
Posted by Leggygal at 03:38 No comments: “Balthazar’s bloodshot eyes met mine, dull and incurious, like he was past even imagining that help would come.”

As the year winds down I am desperately trying to reach my goal to read 250 books this year. Looking at the calendar, it is already the 26th December and I have quite a number to go. In any case, the third instalment in the teen vampire series, Evernight is an action packed foray into the world of vampires, slayers (the Black Cross) and the mysterious wraiths.

Bianca, the child of two vampires, is quite literally sleeping with the enemy, as she and Lucas stay undercover in the quasi cult that is the Black Cross. This book has something for everyone – domineering parents, feuds, sex, vampires, ghosts and really crappy part time employment.

It is impressive that something skewed to a younger demographic translates so entertainingly to this cynical, slightly older audience. It has been a long time between drinks, but  the storyline came flooding back as I began the 3rd outing  of the series.

Now all that remains to say is that – like sand through the hourglass so are the…. um….err… what I mean to say is, I can’t wait to find out what’s in store for the next book.

The Penelopiad by Margaret Atwood “I suspect she used to flirt with her dog, her mirror, with her comb with her bedpost.”

Margaret Atwood rewrites the Odysseus tale from the perspective of his long suffering (and ridiculously patient) wife. The years that Odysseus was out bedding goddesses, putting off sirens and fighting all manner of supernatural creature, Penelope spent waiting at home for her man like the dutiful wife.

Its hard when your cousin is the most beautiful woman in the world and your mum is a naiad and your father tried to throw you in the ocean as a child. Despite these set backs, Penelope proves her inner metal, utilising her favourite maids as an espionage ring to gain information that assists in putting off any would be suitors (after her money and status).

It is these same servants that pay the ultimate sacrifice and even in the after life Penelope is haunted.

This is a really interesting tale and one that I thoroughly enjoyed.

5 out of 5 ancient tales rebooted are intriguing.
Posted by Leggygal at 18:28 No comments: