"I took another piece of cake and there was a short lull in the conversation, during which I considered Julian's suggestion that I might have fallen in love with Rockingham Napier."

You know the feeling when you buy delicious box of chocolates, full of different choices and each morsel is a delight? This book had somewhat of a similar effect on me. I was swept up into Mildred Lansbury's world because she reminded me so much of myself. Perpetually single, either making up the numbers or being the odd one out and cursed with poor taste in the opposite sex.People just expect that you will act as the social glue, ironing out life's problems, taking over their issues, because somehow, a single woman of a certain age can only act in a helpful capacity. No wonder I love to travel. In any case, the novel is adorable and definitely worth exploring. "The last time I went into the Zone at night was three months ago, the swag is mostly gone, and the money is mostly spent."

Maybe its because of too much Christmas cheer? My recollection of this novel is miniscule. Something about a zone that's hard to get into and a roadside picnic describing alien visits. It went into my head and straight out again.
3 out of 5 - yes this is possibly the least informative review I've ever written - I blame wine.
Posted by Leggygal at 02:09 No comments: "By pleasuring the body Maurice had confirmed - that very word was used in the final verdict - he had confirmed his spirit in its perversion, and cut himself off from the congregation of normal man"

I'm currently reviewing a tormented gay love story while watching a George Michael documentary - both made me teary ( the book not the review). Maurice  is a slow burner and yet it captures inner conflict in a visceral way. The sense of the eponymous hero being somewhat removed and different to his classmates and friends is really supported by the writing, which is excellent. It is very British and restrained emotionally in terms of the prose, so that when passion bubbles to the surface it is really palpable despite its restraint. Forster doesn't go into detail about the **spoiler*** finally eventful coupling with the hot groundskeeper ( who in my imagination is the spitting image of Jamie from Outlander) and I think that places this firmly in the romantic category. What I was particularly taken with was the vulnerability and concern that blackmail rather than romance could be someone's modus operandi. Love is scary, putting yourself out there is scary. Wearing your heart on your sleeve when enacting those feelings is a criminal offence, as it was at the time, takes this to another level.
If you are wondering why this didn't get a five out of five from me, it was more about the languidness of the majority of the book. I get that the protagonist is fearful and confused and unsure, I guess as a reader I'm impatient for resolution and I wanted more pace in the middle. Also, Clive is really annoying, but then don't we all chase men who aren't interested sometimes?

4 out of 5 readers can you believe I've not seen the movie with Hugh Grant? Seriously, a young, handsome Hugh Grant - get me the dvd  stat.
Posted by Leggygal at 02:58 No comments:

The Cowboy and The Vampire by Clark Hays and Kathleen McFall "Outside of the Red Cross, they were like children in a candy store, faces pressed to the front pane of the window."

This one has been in the "to be read" pile for quite some time now. Actually, I think I've started it a couple of times. Clearly, it just needed some dedicated time because there was something particularly appealing about a love story between a hunky cowboy and an accidental chosen one vampire.Vampires are kind of my achilles heel. There's something about a kiss on the neck and the promise of eternal life that can really turn a girl's head - well this girl anyway. Okay, I hear you, not exactly a girl.. yes that's probably pushing it.
It takes a little while to get going this novel, bear with it though and you'll swoon with its appeal.
Good news is that this is the first of a series. I need more time with the Cowboy so tis likely I'll be looking into the sequel.

4 out of 5 times its hard for a supernatural to keep up with a human.
Posted by Leggygal at 02:28 No comments:

The Weather in the Streets by Rosamond Lehmann "She sat in his arm-chair twisting the ring on her marriage finger. Rollo's emerald, unearthed from the back of the drawer... to look a person of consequence."

This was surprisingly heart-breaking, beautiful and so much better than the Bridget Jones  reference on the cover. Sometimes it really sucks to be intelligent and female and okay looking. Not the overwhelmingly gorgeous type that sends men into a "let's elope" kind of frenzy. More the "hmm ...she looks like fun and I can actually talk to her type". We seem doomed to take on this role of the other woman by lame guys who don't have the self confidence and general decency to understand when they're on to a good thing. Yep, perhaps I took this one  a little too personally. It was hard not to. In Olivia, I saw myself and my fantastic single girlfriends and in Rollo I saw cheap thrills and ultimate disappointment.

I only hope the narrative is changing. Notwithstanding, this novel conjures up brilliantly the illicit appeal of an affair, of getting the man you've always wanted and yet settling for something so much less than you deserve. It is quietly brilliant. **Spoilers ahead** the abortion section was so moving in its perfunctory nature and juxtaposition of Rollo's wife's story. I just wanted to cry- not so good on the train.

Posted by Leggygal at 02:14 No comments:

The Romance of Lust by Anonymous 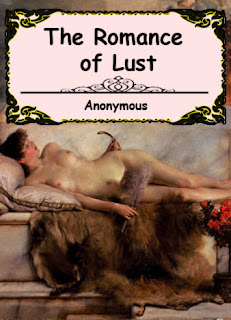 "As yet, I had absolutely no knowledge of the uses of the different organs of my sex"

I was bored and sifting through new posts on Project Gutenberg when I noticed a supposed "classic Victorian erotic novel". Well, I thought to myself, this could be interesting. So, it appears nothing is new under the sun - I've done the research by reading this, so that you don't have to. There seems to be an almost Game of Thrones like obsession with incest. Like, a lot of incest. There are a lot of orifices and quite a bit of repetition. Basically this is just quite porny. Young innocent boy learns,the ways of the world, through lots of practice. I think you can guess the rest.
Why the hell did i give this four out of five? Hey, it had its moments. “Tell Max that it concerns the Sandman. Tell him I have two proofs and can bring them with me.”

With a more than two hour train trip on the cards for a Wednesday night, it seemed like the perfect time to indulge in a big read. When I say "big read" I mean greater than 300 pages, which is particularly challenging with end of the year deadlines, Christmas party season and the like. So, I settled back on the train and immersed myself in the shadow world of espionage. An ageing George Smiley is chased out of retirement by the murder of one of his former agents. The final instalment  in the series that began with Tinker Tailor Soldier Spy is a worthy inclusion in the 1001 novels list and you know how much I love ticking off novels from that seemingly never-ending list. I'm writing this review after a big night out for a friend's significant birthday and so my level of detail on the content is going to be a little light on. Nevertheless this is the moody, suspense ridden le Carré you would expect and it is fantastic - I almost didn't notice how long I was on that darn train trip. It also neatly ties up the series in an entirely satisfactory way.

Posted by Leggygal at 02:15 No comments:

The Illustrated Man by Ray Bradbury This collection of short stories is Twilight-Zone (or Black Mirror) style excellence and the stuff of nightmares. From leaving your children in a very dicey new nursery that could have dire consequences, to turning racial wrongs on their heads in Mars, to the end of the world, to voodoo dolls; here we have a veritable treasure trove of vignettes to whet your appetite. Even a drunken Edgar Allan Poe, Ambrose Bierce and Charles Dickens make an appearance. Could an exact duplicate marionette be the answer to a successful marriage – or the start of a whole new raft of issues? All these marvels and more await the reader here.

All comes to an end with a delightfully wicked epilogue that might be guessed by the introduction.

“And at last a face formed itself there, a face that gazed out at me from the colored flesh, a face with a familiar nose and mouth, familiar eyes.”

5 out of 5 tattooed into my brain
Posted by Leggygal at 03:40 No comments:

A Horse Walks into a Bar by David Grossman, Jessica Cohen (Translation) "People stare at their drinks, swirl their glasses of wine and peck distractedly at their little bowls of nuts and pretzels."

I started reading this winner of the Man Booker International Prize 2017, in September and finished in December. At a mere 208 pages long you can see it took me AN AGE, because I found it tedious, annoying and just plain not worth the effort. Perhaps something got lost in translation?

The tired jokes, and sweaty grossness of the ageing stand-up comedian Dovaleh G, really did not float this reader’s boat….. At all! I’m confounded that this got such amazing reviews. Did I miss something? I was deeply uninterested in the protagonist’s relationship to the comedian and the reasons for his summons to the show. The stand-up routine was excruciating, the way it jumped back and forth from bad jokes to recounting traumas and then back to paltry humour again. I wanted out even more than the audience.

If you know me, you’ll know I love to finish things. Job done, tick in a box. Therefore, I had to muddle through and I did; ever optimistic that it would get better. For me, it just didn’t.

A Week in December by Sebastian Faulks "She'd married John because he was rich and because she felt he'd make few demands on her".

I'm actually quite a fan of Faulks and so was eager to devour this novel when the lovely Louise lent it to me. A rather contemporary setting with terrorism high on the agenda and a side dish of social commentary form the setting for this easily digestible. While the pace was great and I was drawn into the story, there was a real sense that something far more momentous would occur than ever did. It feels that this story got off one station too early and left me feeling a little frustrated. That being said, the journey was an interesting one and certainly had me engaged.Would I recommend this as a read? Certainly, although with reservations. This is one to pass the time on a bus, train or, like me at the car wash and while there are moments of deft social commentary, I just wanted a little more.