The Noise of Time by Julian Barnes "Sarcasm was dangerous to its user, identifiable as the language of the wrecker and the saboteur"

This novel is a delicious surprise package. Looking at such a slim volume, the reader could be mistaken that this might be a short-lived distraction, lacking emotional weight.
That would be a massive miscalculation. Perhaps it resonated with me particularly because, quite coincidentally, my first visit to a live symphony was actually a celebration of the work of Shostakovich.
The tale is likely to resonate with the times we find ourselves in, fake news, blind agreement, mob rule; the Internet age has birthed its own thought police reminiscent of the dark times of Russian History. Where a talented man's art can fall victim to the vagaries of political expediency and the dominant rhetoric.
Casting aside the political, the aspect of the novel that is truly amazing is the lyrical style of the prose which is as beautiful and moving as music. It ebbs and flows with impeccable timing and is to be admired.
This is the kind of novel that writers dream of writing, intoxicating and beautiful.

5 out of 5 songs can also be cyclical.

Posted by Leggygal at 01:49 No comments:

Before Lunch by Angela Thirkell "In it stood the largest, most hideous, most elephant-legged grand piano that Edwardian money could buy."

I really wanted to love this more, it had moments of such delight, despite the timing being a little off. Somewhere in the middle, my interest waned and then, just when I would consider abandoning it, it evoked the odd chuckle and my progress was reinvigorated. I was introduced to this novel by its inclusion in The Guardian's 1000 novels you must read.
I'd probably describe it as Wodehouse Light. It brings a lighter touch to the humour, which is more polite, hidden and yet often, more pointed. This is polished, amusing and subtle and yet it just lacked a little sparkle for me.

I'd really enjoy hearing some other views and I imagine this would make a fantastic television adaptation, somewhere between Downton Abbey and Miss Fisher minus the murder. 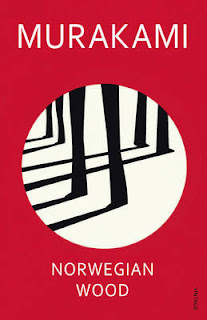 "As the winter deepened, the transparent clarity of Nook's eyes seemed to increase"

This was one of the rare occasions where I'd seen the movie adaptation first. If you're familiar with my reviews you will know that's usually something I try and avoid. Thankfully the book and movie are quite different and diverging beasts, so I was able to put it out of mind.
What's not to love about Murakami and his mix of the dreamlike and the visceral? I'm a fairly recent convert to his works and am certainly enjoying discovering each offering. The other worldliness of being a young adult at university is captured here, albeit with some rather depressing tones of suicide and mental illness. Sex is at the centre of it all, whether it be the one off, life changing kind, the casual hook ups that grow increasingly amorphous or the healing, feeling of belonging kind. Just like life its all a bit confusing and a bit of a mishmash. Set in the 1960s, and the title reflecting the favourite Beatle's song of the protagonist's friend, then later girlfriend (of a sort). She is Naoko, the former girlfriend of Toro Watanabe's best childhood friend ( who kills himself). Joined by their shared loss of KIzuki at the tender age of 17, Toro and Naoko have a strange and often strained relationship.
Toro's love life, and often lack of it, makes for engaging reading and introduces a strange and often tortured parade of characters. If it all sounds a little bit too gloom and doom, it isn't, it remains page turning-ly compelling and is a beautiful read.
I don't wish to ruin the book for you, so, semi-spoiler - the ending drove me to distraction and left me feeling bereft. When you take into account that the beginning of the book is Toro looking back miserably,it does, however, draw a someone perfect symmetry. I wish I understood Japanese so that I could really explore the source.


5 out of 5 times you can never read too much Murakami.
Posted by Leggygal at 23:20 No comments: