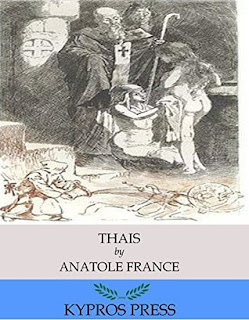 “Then, at the idea that she had given herself to others, and not to him; that she had poured forth an ocean of love, and he had not wetted his lips therein, he stood up, savagely wild, and howled with grief.”

A hermetic monk, who resists all the pleasures of the world, hears of the irresistible courtesan, Thais, and sets out to convert her in order to save her from licentiousness. While he is successful in his endeavours - no mean feat in converting the most popular ho in Alexandria, in the end he finds his devotion is more to her beauty than anyone upstairs. In the end he achieves his end but never gets his end in and is therefore confused and frustrated.
Apparently based upon the story of a fourth century saint, the novel, published in 1890 begins very much in the religious mode, which was hard going for me. He goes off into the desert and tries to convert all  and sundry, somewhat unsuccessfully until he finally gets to the ravishing, Thais. Finally, when he questions his own faith, everyone flees from him because he looks like a vampire. Fun times, don't all men want what they can't have - even monks one suspects. On the plus side, another tick on the 1001 novels list - yay!!

3 out of 5 times you should just give into temptation.