The Selfish Gene by Richard Dawkins 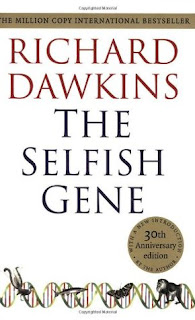 "Females followed a simple rule: look all the males over, and go for the one with the longest tail."

It took me an absolute age to finish reading this sprawling book. The fact that it was on my iPhone was probably a contributing factor. Let me start by saying this was not the book to be reading as a divorced non-breeder around a milestone birthday that hints at the end of fertility, while engaged in a  tumultuous and most likely ill-fated romance. One doesn't need to hear the suggestion that playing coy might be the way to go for the female sex.

Despite that, there are some very interesting conceits included. Of particular interest was the notion of the "Nice guys finish first" chapter which looked at cautious benevolence as the most effective survival method, that is be nice, but don't take any crap if you want to come up trumps.