Significant Others by Armistead Maupin 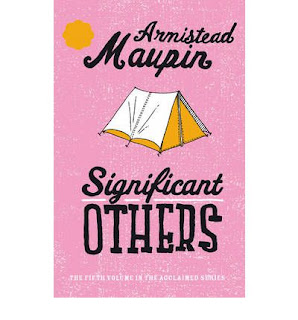 Love, lust, gender roles, AIDS and camping, this is a tale that covers quite a lot of ground.
That mightn't sound like fertile ground for laughs and yet there here we discover some entertaining fare. The machinations of the all-women lesbian love-in music and arts festival Wimminwood, are particularly hilarious. When DeeDee and D'orothea visit with their fraternal twin children, they are shocked that their ten year old boy has to be removed to the boys area, Brother Sun. That will prove the be the first of many shocks, courtesy of dalliances with a famous poet, a kidnapping and much more.

Likewise, we get a hint of the secretive Bohemian Grove and its all-male exclusive camp traditions complete with stage shows and burning effigies of care. I'd never heard of the place until a friend mentioned it (thanks Ben), a strange place where 1%-ers get loose and occult in the forest, all under the watchful eyes of a big owl (yeah sounds like a hoot).

Brian is married to a tv talk show host who he has cheated on with a woman he's since found out is HIV positive. While he awaits the results of his own test he heads off on a bit of a road trip with his best friend, Michael, who happens to be gay and an understanding travel companion in this time of uncertainty, having already endured a positive result. Michael brings along, Thack, who he meets cute on a tour of Alcatraz prisons. There are more characters and side stories and the pages just fly by.

So converging stories of being comedically trapped in a prison for two minutes and finding a love interest, being trapped in a marriage with secrets, being trapped in a camp of militant lesbians or world beating, powerful old men. All tales are dealt with deftly and with a strong dose of humour. I rather enjoyed Significant Others,  perhaps you will too. Now, I look forward to uncovering the other Tales of the City stories.