Year One by Nora Roberts 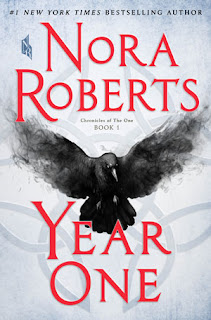 "They came in hacking and puking, bleeding and dying. Most from Doom, some from Doom's by-product of violence."

Cards on the table here; I was lucky to grab a pre-release copy courtesy of NetGalley and I’m grateful for the opportunity. I’ve not had the pleasure of reading anything by this author previously and was engaged from the get go. Judging by her back catalogue on www.noraroberts.com, she has been prolific to say the least; so perhaps that is to my detriment.

The beginning of the novel envelops you in a fast paced Armageddon-like experience as a strange plague unleashed by some birds weaves its way around the world causing pandemonium. It seems no one is safe from the illness and, if the sickness doesn’t get you, weirdness just may. People are discovering new and strange abilities, the atmosphere of violence and self-preservation becomes all pervasive and there are rumours of a military round up of the gifted.

This could all be quite trite dystopian fiction, because – let’s face it, there has been quite a lot of that in recent years. Robert’s character development overcomes this. As a reader the threat of danger is palpable and you can’t help but care for the characters you meet. Not all will be in for the long haul – there are some Game of Thrones style deaths of characters with a deep reader investment, these were particularly jarring for this reader; in a good way.

The supernatural elements grow apace in the later chapters of the book and at first they struck me as anomalous. The violence, sickness and anarchy is particularly easy to relate to. The reader is then swept up into a greater good versus evil battle. That took me a little longer to settle into, perhaps because it wasn’t particularly telegraphed. What could have been a perfectly rendered tale of surviving an almost extinction event pandemic is transformed into something broader. After a few chapters, I was back on board and it was certainly a worthwhile ride.

Year One is the first in a series and while it may have lost me for a little while in the middle, the ending ensured I will be seeking out the next instalment. Look for this first novel due out December 5.

4 out of 5 times I think to myself I need to learn some practical life skills in case we ever lose Google.