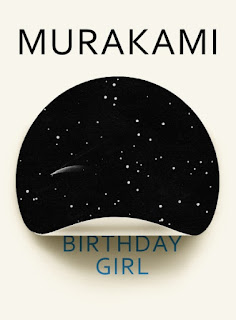 "She waited on tables as usual that day, her twentieth birthday"

Coming in at under 50 pages, this short story released to celebrate Murakami’s 70th birthday, is the exact opposite of the massive Killing Commendatore, recently released by the author. A sliver of a thing perhaps and yet a delightful little read. I pre-ordered this one not realising just how little the book would be – it easily fits in my mail slot. Apparently it was previously released as part of an anthology of short stories in 2004.

I'm going to be completely honest here. Of the 48 or so pages, I had to re-read the final few to consolidate my perceptions of what actually happened. That is not to say it isn't good, rather it is, I think, intentionally obtuse.