Is There Still Sex in the City? by Candace Bushnell 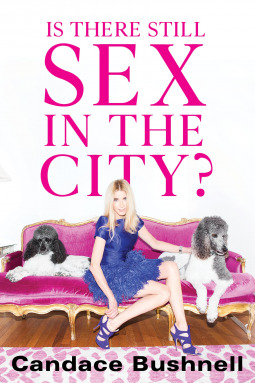 "I didn't know it then, but my relationship was like an aneurism - a death waiting to happen"

I had an email hit my inbox with the news that Sex and the City  author Ms Bushnell had a new release and Netgalley was offering up review copies. I had to pounce immediately!!
While I've indirectly modelled myself on Samantha ( never on purpose - I swear), my recent sojourn ( last Easter) to New York and the SATC tour (not my idea but a guilty pleasure despite the world's worst hangover) had stoked the fire for more.

As I am about 10 years or so behind the SATC girls, I looked forward to a flashy view of perhaps what middle age might hold. There is not a whole lot of vasoline on these lens. This is an engaging foray into Candace's life approaching 60 but not dead yet. How do you deal with TInder and divorces and creepy old blokes when you are no longer in your thirties and well past your forties. This book made me kind of want to find someone stat and avoid the quandry. Yet, as I read on, I realised... nothing really changes. The ages heighten, the moisture depletes, but really we're all the same losers we always were and that goes triple for the online dating scene. I struggle at my age, I can only imagine the drama as the numbers increase.

There's a lot of talk about cougars and I get it.Younger men hold a lot of appeal and are insecure enough to not treat you like dirt. Isn't that a sad indictment of the messed up world we live in. Imagine if age appropriate romance was attainable rather than aspirational. Well a girl can dream. Right now, I'm thinking about how I can advance my career to afford the copious amounts of surgery to reach "super middle" status and triumph in the twilight years.

It's a good thing that Candace Bushnell is such an engaging writer. If she didn't make me smile so often, I'd be jumping off the harbour bridge at the prospect of the oncoming storm of the 50s, 60s and beyond.