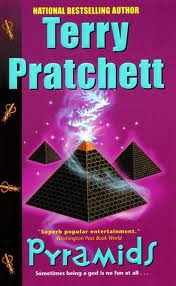 “All assassins had a full-length mirror in their rooms, because it would be a terrible insult to anyone to kill them when you were badly dressed.”

I was really optimistic at the beginning of this tale. The Assassin's guild section was hysterical and certainly in line with some of Pratchett's best work. Once Teppic moves back home and the novel concerns itself with the pyramids, my interest waned a little. This failure to light my literary fire may have had something to do with the medium through which I was experiencing the work - an e-book on my mobile phone. Reading  a page here and there, snatching a spare moment to delve back into Discworld was, in this instance, a trifle frustrating. Generally, I  love escaping into Pratchett's world, this was enjoyable with some classic lines, but ultimately not my favourite escapade.  4 out of 5 pass the pyramids.
﻿