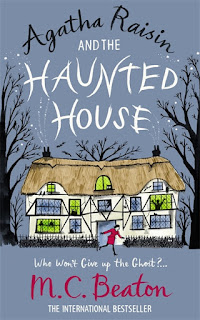 “He forgot that he had recently found Agatha attractive. Now he thought of her as a pushy middle-aged woman who might be mad.”

One of the most thrilling aspects of this murder mystery is the promise of what lies in the next book, hinted fiendishly by the author in the final page. That is not to say that this isn’t an entertaining read. It is a gem as all the Agatha Raisin tales have been to date.
Agatha has yet another new neighbour, but this one is married. Admittedly Paul Chatterton’s Spanish wife doesn’t seem to be around and when a haunted house mystery presents itself he calls on Aggie to do some sleuthing. As thirteen previous novels clearly demonstrated, Agatha is not one to say no to a handsome man with a mystery.
A hilarious scare in the night, isn’t quite what the two adventurers have in mind and it isn’t long until there is the usual body count for this otherwise quaint village. Add in a potential historical treasure hunt, passionate historical society and amateur dramatics, and you know things are about to get entertaining. Bill Wong has yet another attractive officer in tow. She and several other women are bound to get Agatha in a jealous frisson.
I just love Agatha and the return of Sir Charles is always a welcome one (ooh look he’s single and trim again). As you might tell, I just love getting lost in the little village of Carsely. It is the perfect respite from the stressful world in which we live. It’s strange isn’t it that villages with a body count seem far more idyllic than offices full of hidden malevolence.