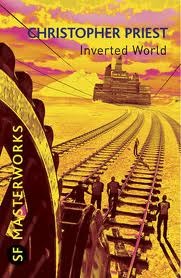 “I had reached the age of six hundred and fifty miles.”

While I have to say this particular novel took me what seemed like an age to complete, upon reflection, it is perhaps better than I initially thought. I say that because its world building style is strange in proportion and bears reflection upon completion.

Unfortunately, I can't tell you too much more. There were moments of keen interest and yet the laborious read I endured, distracted by a new job and other circumstances, rather detracted from my enjoyment of it.

This is one of those rare instances where the visual elements of the novel suggest to me that it would make a more interesting film or TV series than a novel. After all the author did pen The Prestige  which was adapted as a Hugh Jackman, Christian Bale and Scarlett Johansson movie - so anything is possible.

3 out of 5 - spatial awareness is intriguing but not quite enough to keep me engaged.