4.50 from Paddington by Agatha Christie 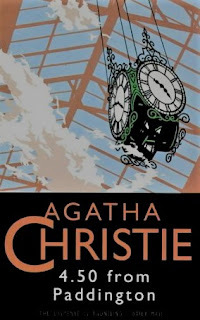 "At a first glance Lucy felt that she was in a singularly bad museum."

Goodness I’ve been a busy girl. I started reading this novel in my spare time, waiting for people, on my phone. I started reading it in January…. And now it is half way through May! It was almost as if the action transpired in actual, real time!


When I was a young thing, probably around the age of eight, I devoured every Agatha Christie book I could get my little hands on to. At twelve, I’d moved on to more serious works. I seem to have pretty much forgotten the content of all of them and am at the stage where I can re-read.
What is stunning is how tame they are. While the body count rises, it is in a fairly demure fashion and just as much time, if not more, is dedicated to the romantic trysts of Miss Marple’s “plant” into Rutherford Hall as to the deathly details of the plot.

I remember always using the name Mrs McGillicuddy as a fake name when I was a child and I’m quite convinced that this may have been the source. I certainly never met anyone of that name. Weirdly it seems the only aspect of the book that I recall.

The action commences on a train, where said Mrs McG ( for brevity) witnesses the strangulation of a woman whose body then mysteriously disappears. She is generally not believed by anyone, save her friend, Miss Marple. Queue murder mystery drama.

I can’t say this was my favourite Agatha Christie novel, to be fair though, I was reading something like a page or two at a time and I still managed to follow the action. Perhaps that reflects its serialisation origins in the 50s.

I found a really interesting article reflecting back on Christie’s work from a modern perspective and perhaps the quote that called to me the strongest was from John Banville, who said, on Christie:

“Her worst fault, however, is that we never feel the slightest twitch of sympathy for, or empathy with, the victim, lying there in the library in a neat puddle of blood. Who could possibly care?”

There is something too neat, too removed and too tidy for me about the crimes in this novel. That doesn’t mean it isn’t a fun read. Who doesn’t love a big fancy house, a plucky cook/housekeeper and an old lady who always has the answers?

4 out of 5 curries do not contain arsenic on purpose.