"If I could have done it at that minute I would have killed him."

My quest to read the novels that inspired Hitchcock's classics continues.  The film version with Tippi Hedren and Sean Connery is not my favourite Hitchcock film and I think that helped lend some distance to the novel. While the two leads were particularly attractive, I preferred the original source. I imagine the movie must have been quite challenging for its time, a rape scene acting as a pivotal plot point. Perhaps, that was what troubled me about the movie, Sean Connery would never have to do that! He's James Bond for goodness sakes! But I digress.... 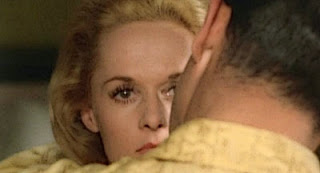 Marnie is a woman caught up in a sea of lies. Lies, which are essential to her life of crime. The attractive young woman banks on her elocution lessons and selection of pseudonyms to fleece unwary employers for substantial sums of money. She lies to her mother about her source of income and in many ways she lies to herself.
When the widower Mark Rutland, one of the partners at her latest place of employment falls for her he gets more and less than he bargained for. More trouble, less affection. Marnie may appear desirable but she lusts for money alone and shirks her conjugal responsibilities with an outright disgust for the physical.
Will her secrets be unleashed by therapy with Dr Roman, will Rutland become just another victim, and what is the real story with Marnie's family? Prepare for some plot twists and turns peppered with suspense.
5 out of 5  ah but this woman has issues.﻿