Lord of Light by Roger Zelazny 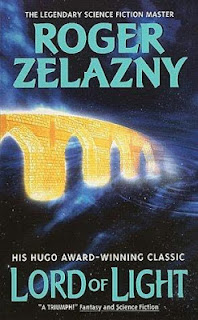 “His followers called him Mahasamatman and said he was a god. He preferred to drop the Maha- and the -atman, however, and called himself Sam. He never claimed to be a god. But then, he never claimed not to be a god. Circumstances being what they were, neither admission could be of any benefit. Silence, though, could.”

Where to begin with this one? Perhaps the beginning. A winner of the 1968 Hugo award and the favourite - if reviews on Goodreads are to be believed - of many a science fiction fan, this novel left me a little cold.

Certainly there were moments of brilliance, some laugh out loud sentences and a strange melange of deities, and bananas. I must confess to reading this on my iphone and for a speed reader it took an eon to finish. Well, that is, if an eon was equal to a month - which clearly it isn't.

I don't seem to enjoy anything with a Siddhartha flavour, and cannot put my finger on why.

What is of particular interest to me, after recently watching the brilliant movie Argo, was its connection with this novel. In the real version of events, it appears the script in question was actually based on Lord of Light, for more information check out this article.

If your tastes run to a multitude of characters and a plot that gallops all over time and space and requires serious concentration then your appreciation for this work may be far more favourable than mine. 1 out of 5 from this omnipotent being.