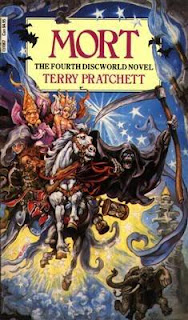 “After five minutes Mort came out of the tailors wearing a loose fitting brown garment of imprecise function, which had been understandably unclaimed by a previous owner and had plenty of room for him to grow, on the assumption that he would grow into a nineteen-legged elephant.”

In Terry Pratchett's fourth discworld novel, the reader enjoys an initial meeting with death. Death has a rather thankless job, an adopted daughter called Ysabel, a man servant called Albert, a rather snazzy scythe, a penchant for shouting in capital letters and the need for an apprentice.

Mortimer (Mort) is unsuited to his family profession of regrown wine harvesting, and frankly a little ill-suited to most professions. When death takes him on as an apprentice, time-bending, earth shattering adventures ensue.

In typical Pratchett style, there are lines in this book that made me laugh out loud - this did raise some strange looks from people when I was reading it on my phone. Who could have predicted that reading an e-book could leave such a strange impression on passersby?