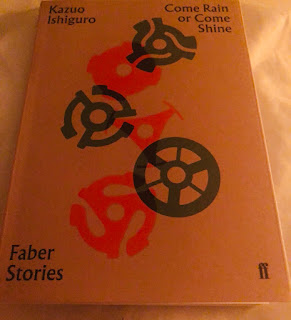 "At last I got to tell him what had happened."

I read this last week before bed one night. It is a slim volume of a short story, that was apparently previously published in Ishiguro's Nocturnes: Five Stories of Music and Nightfall. It resonated with me because I often find myself as the third wheel with couple friends and particularly when they're going through a rough patch. Nothing like a sad, sack single friend to act as a break in the arguing I guess.

Ray has been friends with Charlie and Emily since university. Emily was the girl that everyone would have chased after had she not settled with Charlie. He has his own dramas going on but tonight, he's tasked with keeping his mate's wife content until his return. A calming influence on a choppy domestic scenario.

This is a charmingly honest vignette that gorgeously hints at the poor behaviour we are all guilty of. It is in fact a delight and one savoured very quickly.

5 out of 5 people could never not read a discovered diary.
﻿