The 007 diaries filming Live and Let Die by Roger Moore 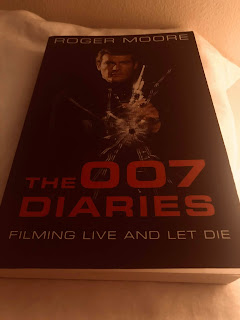 “Fame at last! Me to be the bunny for liberated ladies! Needless to say, I was not about to pose in the altogether!”


Words can’t possibly describe how much I enjoyed this delightful little tome, but I will give it a shot! The Late, great, Roger Moore is a skilled raconteur and his depiction of life on a film set is far from glamourous (most of the time) with the odd bit of name-dropping glitz.


I can’t tell you how many times I’ve watched Live and Let Die— at a guess, I’d say umpteen times. A massive James Bond fan, despite his hideous treatment of women (I don’t know I can’t understand it – I think I want to be him rather than bed him), Roger Moore remains one of my favourite Bonds. His amazing ability to deliver with a twinkle in his eye and a smirk carries forth within his writing also. Here we have a daily rundown of all the things that occurred on set – from breaking teeth to crocodile infested waters, it’s rather fun and one can only imagine the high cost of insurance such adventures might warrant.


There is a disclaimer at the beginning of the book about it being written in another time where social norms differed. That kind of adds to its charm in that it is so retro. Boobs, babes, cigars and the odd bit of offensive language aside, this one was a delight.