The Long Take by Robin Robertson 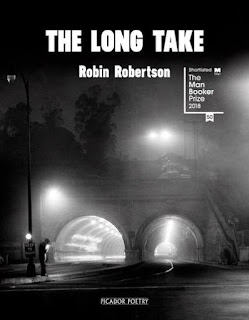 “I mean the fact that this is a country where there aren’t enough homes,

enough jobs, where one in six Angelenos are ex-servicemen

and they’re lying out on Skid Row –

but all anyone ever talks about is watching for Russians,

HUAC locking up half of Hollywood,

We won the war, but we’re living like we lost it.”


Shortlisted for the Man Booker Prize 2018 and winner of the 2018 Goldsmiths Prize, The Long Take is not your average novel. It is, something rather beautiful, a tale told in poetry rather than typical prose. The economy of words has a really masculine, noir feel that helps set the scene of the returned soldier dealing with PTSD and drifting from one dreamscape to another across post WW2 America.

There’s a rhythm to the words that mirrors the restless wanderings of the protagonist and his descriptions feel so immediate and draw in all the senses. As a reader, I was transported to the dirty backstreets, to the seedy bars and to the newsroom. I was haunted by a man who was in turn haunted by the trials of war and I can understand why this received such critical acclaim.
Almost cinematic in style, this tale may not appeal to all, but I’d recommend taking a wander among its backstreets. Robertson’s editors must love the kind of genius that can  take out awards in the categories of both novel and poetry and deservedly so.
5 out of 5, but no, it doesn’t rhyme.