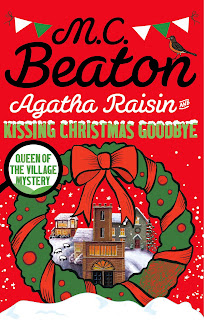 “It seemed as if all the dimmest girls in Mircester fancied themselves as detectives. Some had come dressed in black leather and stiletto-heeled boots, thinking that a Charlie's Angels image would be appropriate.”

While this was perhaps not one of my favourite outings with Agatha, it was nevertheless enjoyable. Agatha receives a letter summoning her to the manor house of a Mrs Tamworthy who suspects she is about to be murdered by one of her relatives. When Mrs Tamworthy is killed by Hemlock, Agatha has yet another murder to solve. This is just as well because she is, as per usual, obsessed by thoughts of winning back James Lacey with a spectacular Christmas celebration.

Our useless cook of Carsely has invited the entire village and the last time she tried to cook a Christmas turkey the fire brigade got involved. Agatha's new recruit, Toni, a teenager with a nightmare of a family back story, proves to be a more than able detective. It is perhaps Agatha's jealousy which pervades the story that put me off a little on this particular jaunt.

That being said, you know how much I do enjoy her intrigues and I will certainly be back for more. Just as sure as Mrs Bloxby will always open the door to Agatha, regardless of her husband's instructions. I can't reveal, because of spoilers, but Bill Wong's luck might just be changing! Have I said too much?

5 out of 5, Christmas with Agatha is always a riot.